Gourmet Foods In Malaysia: The Heart of The Eastern Gourmet 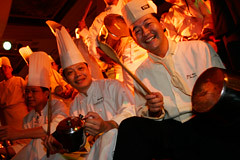 For years Malaysia has been the hot spot for tourists all over the world who crave the hot and spicy cooking. It is also the ultimate food destination worldwide and steps have been taken by the government to make it a global HALAL hub. People who long for gourmet foods in Malaysia need not grumble, they can easily find it everywhere as long as they’ve the urged to do so.

The famous source for inspired Malaysian cooking is non-other than Chef Wan, our own Malaysian food ambassador. For years now he has been making Malaysian proud with his creative cooking tours and promotions abroad. Today Chef Wan is one of the committee members of The Flavour of Life World Media Festival which is the premier cookery groups on the planet. He single handedly transformed the traditional Malaysian cooking into international icons recognized by foreigners through the many accolades, including the Gourmand Media World Award. Now people all over the world can access Chef Wan and other Malaysian chef celebrities in numerous Malaysian award winning recipe books like ‘Chef Wan Mengelilingi Dunia’ (Chef Wan Around the World) and Betty Saw’s ‘Semuanya Tauhu! Lebih Dari 100 Resipi Kreatif’ (All Beancurds, More Than 100 Creative Recipes) available at leading bookstores and the internet. The internet revolution has also revolutionized Malaysian cooking.

Nowadays Malaysian restaurants are mushrooming overseas, like in New York, Melbourne and London. ‘Satay’ one of the most popular Malaysian dishes is a must in their menu. ‘Satay’ is marinated chicken, beef or mutton are skewered onto bamboo sticks and grilled over hot charcoal and is served with ketupat (rice boiled in coconut leave) and served with sliced cucumber, onions and peanut sauce for dipping. The ‘Satay Kajang’ franchise has opened up several branches overseas, mainly in Australia and England over the years and has become a one stop centre for Malaysian foods in these countries, especially the Malaysian traditional cuisines, rivaling those of Chinese, Indian and Thai foods, traditionally the foreigner’s favourite. Generally it’s not hard to find gourmet foods in Malaysia. Locals and foreigners only need the right resource to find the right stuffing.

Nov 9, 2012 Admin
Discover the truly asian spirit and know more about Malaysia, its people and the lovely country.