The union or canton of dark blue in the upper quarter of the flag next to the staff represents the unity of the people of Malaysia. The union contains the crescent which is the symbol of Islam, and the star, the 14 points of which symbolise the unity of the 13 states of the federation with the federal government. The yellow of the crescen and the star is the royal colour of the Rulers.

The Coat of Arms of Malaysia shows a 14-pointed star which represents the equal status of the 13 states and their unity with the federal government. The Star and the Crescent from the traditional symbols of Islam, the official religion of Malaysia. The five keris represent the former Unfederated Malay States of Johor, Kedah, Kelantan, Perlis and Terengganu. The four former Federated Malay States of Negeri Sembilan,  Pahang, Perak and Selangor are represented by the four centre panels, the permutations of whose colours represent the colours of these (red, black and yellow for Negeri Sembilan; black and white for Pahang;  black, white and yellow for Perak and red and yellow for Selangor).

The left-hand division of the shield represents the state of Penang (Pulau Pinang) and the right-hand division, with the Melaka tree, the state of Melaka.The states of Sabah and Sarawak are represented by the left and right sections below respectively while the centre contains the national flower, the bunga raya (hibiscus). The tigers, rampant on either side of the shield are retained from the earlier armorial ensign of the Federation of Malaya (and before that of the Federated Malay States). The yellow colour of the scroll containing the Motto in Roman and Jawi script is the royal colour of the Rulers.

The Royal Standard is flown to mark the presence of His Majesty, the Yang di-Pertuan Agong. It has a yellow background with the Coat of Arms of Malaysia (described above) in the centre enwreathed by two sheaves of paddy. Yellow is the symbol of royalty. The sheaves of paddy signify abundance or prosperity.

The National Anthem, whose tune has a romantic background which links it to the exile of Sultan Abdullah of Perak to the Seychelles by the British, was selected by a special committee headed by Malaysia’s first prime minister, the late Tunku Abdul Rahman Putra Al-Haj, who was the Federation of Malaya’s Chief Minister and Minister of Home Affairs at the time. Initi ally, a world-wide contest was held for the composition of a national anthem for the Federation of Malaya. However, none of the entries including those from distinguished composers of international standing, were found s uitable.

During the 1992 National Day celebration, the National Anthem was given a rather fast beat. 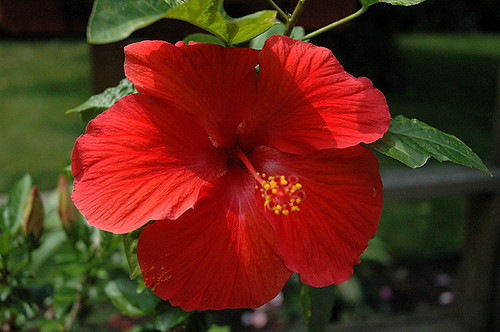 The national flower is the bunga raya (hibiscus) (Rosasinensis) which has an interesting history. No one knows when flower was first introduced to Malaysia but undoubtedly it came by trade from its original homeland in China, Japan and the Pacific Islands, probably before the 12th century.From early times the bunga raya has been known to have many uses, mostly medicinal. Its petals were commonly used to darken and enhance women’s eyebrows: some people still use the roots of the flowers as a cure for fever and other ailments .

Skin eruptions and glandular trouble are said to be relieved by the application of the juice obtained from its leaves and roots, while a poultice prepared from the leaves is often applied to cure headache.The bunga raya is found abundantly in Malaysia today. It grows in several varieties of colour: the red, five- petalled grows in several varieties type was chosen for Malaysia’s national flower.

The Five Principles of NationHood

Introduced after the 13 May 1969 incident, the adoption of these five principles as pillars of the national philosophy and outlook represents an attempt to base national unity on certain concepts which are universal and acceptable to all citizens, regardless of ethnic origin or religious affiliation.The declaration of the five Principles is formulated as follows:

OUR NATION, MALAYSIA is dedicated to

We, her peoples, pledge our united efforts to attain these ends guided by these principles:

The RM10 million National Mosque stands diagonally opposite the Kuala Lumpur Railway Station in a laid-out garden of approximately 5.5 ha.It was designed and supervised by the Federal Public Works Department and took three years to complete. The building itself occupies an area of 2090 sq. m. Facilities include a hall (dewan), a mausoleum, a library, offices, an open courtyard and a minaret.The Grand Hall is surrounded by deep verandahs which are screened off white grilles of traditional Islamic design similar to those in the mosque at Agra and Patephur Sikri in India. The Grand Hall and the verandahs provide a praying space of 7432 sq. m and can accommodate 8,000 people. The floor of Grand Hall is carpeted.
The remaining area has a finish of precast terrazzo slabs.The Dewan is located on the south side of the Mosque and is an all-purpose hall which can seat 500 persons. The mausoleum situated at the rear of the Mosque stands in a circular reflecting pool and connected to main building by a covered footbridge. It is circular in plan and is covered by a pleated shell concrete dome similar in shape to that of the Grand Hall but having only seven folds, one of which covers a reserve for national hero’s tomb.The air-conditioned library and offices are situated at the rear of the main building. The open courtyard is opposite the library and is in front of the Grand Hall. Courtyards in mosque in West Asia are open to the sky and usually feature a cluster of fountains in a pavilion or an open pool where ablution can be performed. The National Mosque countryard is partly covered by 48 independent concrete parasols to provide shade and architectural conrast, the fountain for ablution being located on the floor beneath.

The minaret is 3.8 m rising from the centre of a long and narrow reflecting pool by the side of the Grand Hall. The top of minaret is decorated with a concrete spire which takes the form of a closed umbrella and soars 27.5 m above the balcony.

Ladies have a separate entrance directly connected to the ladies’s ablution hall and they pray in the gallery at the north end of the building. This gallery also provides booths for television and radio services and place from which visitors can witness the proceedings.

The National Monument, dedicated to those who have died in the cause of peace and freedom, stands on a commanding site at the Lake Gardens in Kuala Lumpur. The Whole area reserved for the National Monument occupies approximately 48 562 sq. m, of which one third is the actual area of the levelled crest of the hill. There are five principal features in the memorial area. These are;

the National Monument itself;
a long reflecting pool with fountain;
a crescent-shaped pavilion;
the cenotaph and the ancillary gardens.
The National Monument, comprising seven bronze figures, stands on the oblong base in the centre of the reflecting pool. The figures represent different branches of the Malaysian security forces. Five of them depict the victorious security forces. The top-most central figure, the only one unarmed, holds the Malaysian flag. Lower down, to the left and right of the central figures are two soldiers, one holding a rifle and bayonet and the other a machine-gun. In the centre, between them, are two other soldiers, one wounded and the other giving aid and comfort. Below them are two fallen enemies representing the Communists terrorists. The monument represents the triumph of the forces of democracy over the forces of evil. The memorial and its magn ificent setting took over five years to complete, and is the brainchild of the American sculptor, Felix de Weldon, who was also created the Iwo Jima Memorial in Washington DC. The Monument cost RM600,00 to build.

The Parliament House, the symbol of democracy in Malaysia , is set up on hill in the scenic Lake Gardens and is flanked by fountains and other ornamental features. Access is via a four-lane highway from the city centre.The two chambers and their attendant facilities are placed in one rectangular complex, four storeys high, 190 m wide and 61 m deep. Rising through the centre of this concourse is the sharp triangular outline of the roof of the House of Representatives. In front of this building rises a twent y level tower block, 77 m high, containing offices for ministers and members of the Upper and Lower Chambers. Topping the fifteen floors of office space in the tower block is an open-sided terrace commanding a magnificent view of the federal capital. This is used for informal receptions.On the ground floor is a small circular surau or prayer room which can accommodate 100 persons. Dominating the ground floor is the massive banqueting hall which can accommodate 500 people. Other facilities on the ground floor in clude a library, a press room, lounge and canteen. A striking feature of the entire project is the elaborate water system which circulates specially treated water to the four floors of the main block as well as 730 000 litre pool in the forecourt. The project took three and a half years to complete. It was built at the cost of RM16 millions.

The National Language, Bahasa Melayu is established as such under Article 152 of the Constitution, which also safeguards other languages by stipulating that no person may be prohibited or prevented from using (except for official purposes) or from teaching or learning any other language. As the national language, Bahasa Melayu must be usedfor official purposes which includes its use by a federal and state governments,and as defined by the constitutional amendment of 1971 by all authorities (including local authorities) and statutory bodies. By the same constitutional amendment the status of Bahasa Melayu may not be questioned, and any amendment to Article 152 can only be made with the consent of the Conference of Rulers.

Perhaps a somewhat unusual symbol, but the Proton Saga nevertheless has a significance for Malaysians which goes beyond the mere production of a passenger car. It symbolises the determination of the nation to shake off its traditional status as a proucer of primary commodoties and to emerge as a member of the community of industrialised nations. The project was first announced in 1982 and became a reality in September 1985.

Visitors to the tower can enjoy the serene view of the Kuala Lumpur city from the first and second levels of the Tower Head which are the Public Observation Platform and the Seri Angkasa Revolving Restaurant.

The two express lifts transport visitors up to the observation level at 276m above ground level within 60 seconds. Here visitors can see the day or night scenic view of Kuala Lumpur city. With the availability of binoculars, visitors can look out as far as the Straits of Melaka on a clear day. The Ser Angkasa Revolving Restaurant as the highest restaurant in Malaysia at 282m above ground level the public the chance to dine whilst taking in the sights.

The Upper-Ground Floor offers visitors an array of sourvenirs and local handicraft, while light refreshments such as fast food, ice-cream and snacks are also available.The 146m pedestrians mall is beautifully landscaped complete with a reflecting pool and fountains along the walkway.

Equipped with modern technology, Menara Kuala Lumpur has allocated the top four floors of the Tower Head for telecommunications research and development.

Menara Kuala Lumpur will be established as a focal centre for international and local cultural activities, arts and crafts. This magnificent tower will join the other superstructures of the world as an international landmark. It will become a new source of pride for Malaysians and a measure of the nation’s progress towards Vision 2020.

Discover the truly asian spirit and know more about Malaysia, its people and the lovely country.